Game of Thrones: Ascent Wiki
Register
Don't have an account?
Sign In
Advertisement
in: Great Houses, Houses of the North
English 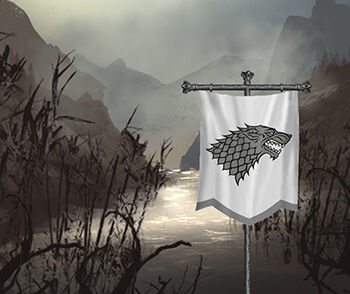 Mad King Aerys found the Starks as implacable as the harsh northern winters. Those raised in high snows know how to fight and how to survive. They know that you must stand with friends if you hope to stand at all.

Stark vassals are recognised for unwavering loyalty, prowess in battle, and bafflement at the intrigues of the southern court. They are the descendants of the First Men and heir to those who built the great ice Wall that protects the realm.

They hold with the Old Gods and the Old Ways. They know that the dangers beyond the Wall - direwolves, Wildling Raiders and worse - are more than just tall tales or distant memories. Should you visit the crypts of Winterfell, you'll see that the stone eyes of dead lords and kings still remember.

You understand that even the brightest day will inevitably lead to the knife-sharp winter winds. Bone-deep chill is as familiar as your own family. Some may call you grim or pessimistic, but you know one truth better than anyone: Winter is Coming!

Characters that belong to, or have sworn fealty to House Stark that are featured in the game...

Quests that are exclusive to characters that have sworn fealty to House Stark.

Letter from an old friend

For your eyes only
Save the Night's Watch/Stark

House Stark have a specialization in Aid, as well as in unit production speed. The talents will become lost should you decide to reincarnate, unless you select one of them to become permanent during the reincarnation process.

The Hunting Lodge is House Stark's Fealty Building, and unlocks at level 13. It produces Fur and Cloth, and is one of the required buildings to attempt to hatch the dragon egg.

Alliances that have sworn fealty to House Stark include:

Wolves of the Weirwood