Game of Thrones: Ascent Wiki
Register
Don't have an account?
Sign In
Advertisement
in: Great Houses, Houses of the Westerlands
English 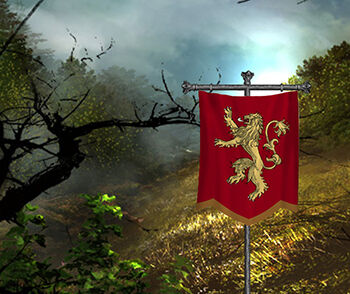 Hailing from Casterly Rock, and another branch in Lannisport is one of the seven Great Houses known as the Lannisters. Most often, Lannisters are known, if not by their sigil, but by their looks. Hair of spun gold and emerald eyes. The Lannister sigil is recognizable by its rearing golden lion upon a crimson banner.

Once this grand house was falling in ruin before being rebuilt to its former glory by Tywin Lannister, and remains a powerful house to this day.

Despite belief, the words A Lannister always pays his debts are not their official motto. That belongs to Hear Me Roar.

There are notable Lannisters in Westeros. Tywin Lannister is the titular head of the Lannister House and formerly served as Hand of the King to King Aerys II Targaryen (also called The Mad King) before being dismissed. Queen Cersei, Tywin's daughter, is twin of Jaime Lannister and wife of the late King Robert Baratheon. Ser Jaime Lannister ("Kingslayer"), Knight of the Kingsguard, twin to Cersei and son of Tywin. Tyrion Lannister, called Halfman and the Imp, a dwarf of great cunning, is the last of Tywin's children.

Their gold mines in the Westerlands make them one of the richest Houses in Westeros. The power and influence of the Lannisters cannot be overstated.

It is as much a threat as a promise for Lannisters to say that they always pay their debts. Fealty provides great returns, and loyalty is richly rewarded. Rebellion and insubordination is destroyed root and stem, as the LionHearts of Westerlands could attest if any were left alive. No one doubts Lannister subtlety, for this is the family whose ancestor Lann the Clever used only his wits to gain the stronghold of Casterly Rock and stole gold from the sun to adorn his hair. Loyal Lannister vassals know how to wield their hold to good effect. They cannot, perhaps, ever be quite as rich as a Lannister, but their liege lords do not begrudge the effort. Deep pockets full of gold, and the backing of a lion of the west, goes a long way to security among the merchants of the world - and in the shifting allegiances at count. Should you visit the dockside bazaar of Lannisport, you can haggle and trade, but you may end up with more than you bargained for - because nothing is without cost.

You are unparalleled in running the engines of an economy, which serves you well in the purchase and sale of power. Your opponents will quake when you show them your teeth, when you shout Hear Me Roar.

Characters that belong to, or have sworn fealty to House Lannister that are featured in the game...

Quests that are exclusive to characters that have sworn fealty to House Lannister.

House Lannister have a specialization in Swindle actions, and have several talents to reduce the silver production cost of items. The talents will become lost should you decide to reincarnate, unless you select one of them to become permanent during the reincarnation process.

The Mine is House Lannister's Fealty Building which unlocks at level 13. It produces Ore and Iron, and is one of the buildings required to attempt to hatch the dragon egg.

Alliances that have sworn fealty to House Lannister include: