Game of Thrones: Ascent Wiki
Register
Don't have an account?
Sign In
Advertisement
in: Great Houses, Houses of the Iron Islands
English 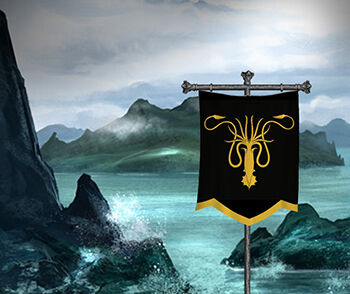 Salt, steel and stone run in the veins of the Ironborn. Greyjoys live to fight, to sail, and to take what they want by force of arms.

They are the line of the Grey King, who slew the sea dragon Nagga and made a hall from her bones. They preserve the ancient traditions, and their raiding is blessed by the Drowned God. Although their rebellion against the Iron Throne was quashed, the old words claim that what is dead can never die, but only rises again, stronger and harder. The Greyjoys will rise again and from the Seastone Chair to rule over rock and wave and coast.

The Ironborn fight to the death for what is theirs by right and will carve their independence from the flesh of their enemies. They know the value of freedom, for each is rule absolute on their own ship. Like the Kraken sigil of the Greyjoys, the Ironborn are undisputed master of the seas, and stand as strong as the Kraken's arms. Should you search the waters for a wrecked ship cast asunder by the Storm God, you will see a fraction of the treasure that can be gained by an unforgiving will and blade in hand.

You pay the iron price for your wealth, rather than the gold. You are remorseless as the tide, and the soft people of the greenlands are no match for your steel. From the longships you chant:
We are reavers! We are raiders! We Do Not Sow!

Characters that belong to, or have sworn fealty to House Greyjoy that are featured in the game...

Quests that are exclusive to characters that have sworn fealty to House Greyjoy.

► Stirring the Depths
► The Drowned God's Seal
► The Kraken Lurks
► The Kraken Stirs
► The Kraken's Daughter
► The Saltstone Writings (Story)
► The Unquiet Sea
► Thinner Than Water
A Bolt in the Dark
A Day Long Overdue
A Dream of Thrones/Greyjoy
A Feast for the Kraken
A Formal Protest/Greyjoy
A Friendly Race
A Lion's Bait
A Mad Priestess
A Prize Sight Indeed
A Ravenous Beak
A Saltwife's Bastard
A Search of Pyke
A Secret Tryst/Greyjoy
A Shipmen's Feud
A Thrall is Missing/Greyjoy
A Visit from A Magistrate
A Weasel in Furs
A Wedding at the Twins/Greyjoy
An Act of War
An Attack on Pyke
An Audience with the Greyjoys
An Honored Guest/Greyjoy
Any Port in a Storm
Better Off Dead/Greyjoy
Blood in the Water (Vol I)
Blood Must Not Run/Greyjoy
Brothers But In Name
Call for Levies/Greyjoy Allegiance
Crossing the Kraken
Darkness in the North/Greyjoy
Dreams and Prophecies/Greyjoy
Enemy of the Kraken
Fanatic/Drowned God
Finger Dance
From One Kraken
Hidden Fangs/Greyjoy
His Father's Son
Iron In His Blood
Just What He Seems
Kingslayer/Baratheon
Kirth, Kith, or Kin
Kraken or Squid
Kraken's Eye
Lady of These Lands/Greyjoy
Like Brothers
Lore of the Drowned God's Seal
Mainland
March of King Robert/Ironborn Quests
Monsoon/Greyjoy
More Than Half/Greyjoy
My Claim to the Iron Islands
New Blood/Greyjoy
No Son of His/Greyjoy
Not of Iron
Penance/Drowned God
Quellon Greyjoy
Reek (Quest)/Ironborn
Rough Seas in the North
Salt, Rock, and Iron
Saltwater in the Wound
Seeker of the Book
Seeker of the Book/Greyjoy
Seeker of the Book/Greyjoy/Family
Swift Dark Wings
Ten Years Aground
Test His Interest
The Absent Prince
The Battle of Gulltown
The Battle of Torrhen's Square/Ironborn Allegiance
The Bloody Star/Greyjoy
The Dead Men
The Dearly Departed/Greyjoy
The Drowned God's Will
The Faircastle Gambit
The Flayed Men/Ironborn
The Gift of Iron
The Green Lands' War
The Grey Ash Standard
The Imp Wins/Greyjoy
The Iron Fleet
The Iron Might
The King of Salt and Rock
The Kraken Cipher
The Lonely Light
The Marriage Trap
The Place of Honor
The Prince of Winterfell
The Promise of Support/Greyjoy
The Summer Sea (Vol BT)/Greyjoy
The Twice Crowned Calls
The Vulnerable Coast
The Whispering Wood/Greyjoy
The Writings Revealed
Their Flags Unfurled
Them or Us/Greyjoy
They Heed the Call
Too High a Price
True To The Drowned God
Unmatched Loyalty/Greyjoy
Vision from the Drowned God
Water, Water Everywhere
We Do Not Sow/Greyjoy
What is Dead Cannot Die
Wolves at the Trident

House Greyjoy have a specialization in Harass actions, and in reduction to Adventure completion time. The talents will become lost should you decide to reincarnate, unless you select one of them to become permanent during the reincarnation process.

The Shipyard is House Greyjoy's Fealty Building which unlocks at level 13. It produces Iron and Fish, and is one of the required buildings to attempt to hatch the dragon egg.

Alliances that have sworn fealty to House Greyjoy include: