Game of Thrones: Ascent Wiki
Register
Don't have an account?
Sign In
Advertisement
in: Great Houses, Noble Houses, Houses of the Stormlands
English 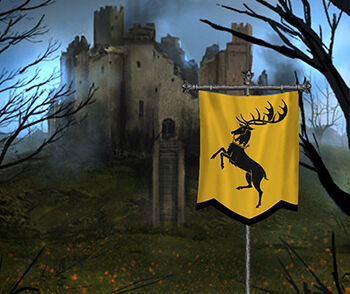 "Ours is the Fury"

House Baratheon is King Robert's own house, traditionally hailing from The Stormlands but after Robert's Rebellion two cadet branches were formed in The Crownlands, one in King's Landing and another in Dragonstone. The sigil for this Great House is an ebony crowned stag on a yellow field.

Wind whips at stalwart trees, bending them at unnatural angles. Rain lashes against the hard stone of a castle wall. It is just another day in The Stormlands.

The destruction of the gale is nothing compared to what the Baratheons can wreak when angered. They are the heirs of the Storm King, who legend says defied gods in order to marry his divine bride. They took up arms against The Mad King, and Robert swung his warhammer to scatter the rubies from the Targaryen's breastplace. When the regime of dragons fell, the reign of the stag took over.

Baratheon bannermen are determined warriors, fierce on the battlefield and fierce in their friendships. They are always ready to charge into an attack, even if they must ignore such trifling concerns as a proper defence. No one is finer with the weapons of war, and a line of loyal vassals can form a force as unyielding as a the rocks of Shipbreaker Bay. Should you make your way to the castle of Storm's End, you can feel the spells of protection built into the walls and the slumbering power that binds the stones.

You revel in the honest work of open conflict: solid, gleaming steel in your hand, the snap of banners, and a warcry in your throat. If any stand in your way, you will fell them like trees. You will unleash the pure clean rage of the storm. You will show them Ours is the Fury!

Characters that belong to, or have sworn fealty to House Baratheon that are featured in the game...

Quests that are exclusive to characters that have sworn fealty to House Baratheon.

► A Matter of Honor
► Fire and Fury
► Gold and Iron
► One King, Two Pretenders
► The Rightful King
► The Thunderglass
► The Thundersheaves
► Tipping the Scale
► Wine and Roses
A Baratheon in Name
A Bastard of the Stormlands
A Clash of Faiths (R'hllor)
A Dream of Thrones/Baratheon
A Feast to the Stag
A Foreigner's War/Stannis
A Formal Protest/Baratheon
A King Defeated
A Likely Suspect/Other Fealties
A Matter of Discipline
A Matter of Honor (Quest)
A Place in the Queue/Baratheon
A Royal Invitation
A Secret Tryst/Baratheon
A Summer Forecast
A Summons From the King/Baratheon
A Trickle of Titles
A Truer Faith (R'hllor)
A Weary King
A Wedding at the Twins/Baratheon
An Act of War
An Attack on Storm's End
An Honored Guest/Baratheon
Another Wedding (Baratheon)
Any Port in a Storm
At the Door
Back of the Line
Baratheon Emissary
Better Off Dead/Baratheon
Brothers Alike
Call a Fool a Fool
Call for Levies/Baratheon Allegiance
Claims and Accusations/Baratheon
Daring Risks in the Kingswood
Dragonstone (Vol BT)
Dreams and Prophecies/Baratheon
Enemy of the Stag
Fanatic/R'hllor
Final Secrets of the Thundersheaves
From One Stag
Hand and Crown/Baratheon
Hand for the King
Hearts and Minds
Heir to the Iron Throne/Baratheon
Hidden Fangs/Baratheon
His Star Ascending
Jaws of the Beast/Baratheon
Just a Little Blood
King At The Wall
King by Right of Blood
King by Right of Might
King Robert
Kingslayer/Baratheon
Leave Me to My Lies
Legitimate Rule/Baratheon
Loyalties (Vol FB Part 1)
Lyanna Stark (Vol BT)/Baratheon
March of King Robert/Baratheon Quests
More Secrets of the Thundersheaves
My Claim to the Stormlands
My Wife to Be
New Leaders/Baratheon
No Lord in the Stormlands
No Son of His/Baratheon
On Bended Knee
Or Get Off The Chamberpot
Peace at Last
Pigstalking
Pigsticking
Robert's Deeds
Robert's Reflection
Salutations and Introductions
Secrets of the Thundersheaves
Secrets of the Thundersheaves Continue
Seeker of the Book
Seeker of the Book/Baratheon
Seven Stout Reasons
Shipbreaker Pilot
Smuggler's Spit
Soothing a Pain - A Little Pain
Soothing a Pain - Butchery
Soothing a Pain - Cleaver
Stalwart (Vol I)
Stormlands (Vol V)
The Battle of Gulltown
The Bloody Star/Baratheon
The Bored Crown Prince
The Desolate Pledge
The False Seven
The Hand's Investigation/Baratheon
The King in the Kingswood/Baratheon
The King is Dead/Baratheon
The Needs of the Fleet
The Old Gods and the New
The Passing of King Robert
The Promise of Support/Baratheon
The Red Messenger
The Stormkey
The Ties That Bind
The Winnowed Stag
The Young Buck Calls
Them or Us/Baratheon
Three-Legged Stag
Tipping the Scales
Too Rare for Ravens/Baratheon
Treating With Traitors
Trial by Fire
True To The Lord of Light
Under The Table
Unmatched Loyalty/Baratheon
Virulence and Vigilance/Baratheon
What Have You Done For Me Lately
While the Kraken Sleeps
Witness to Regicide

House Baratheon have a specialization in Fight actions, as well as an increased chance to obtain superior results when producing units. The talents will become lost should you decide to reincarnate, unless you select one of them to become permanent during the reincarnation process.

The Feast is House Baratheon's Fealty Building which unlocks at level 13. It produces Wood and Stone, and is one of the required buildings to attempt to hatch the dragon egg.

Alliances that have sworn fealty to House Baratheon include: